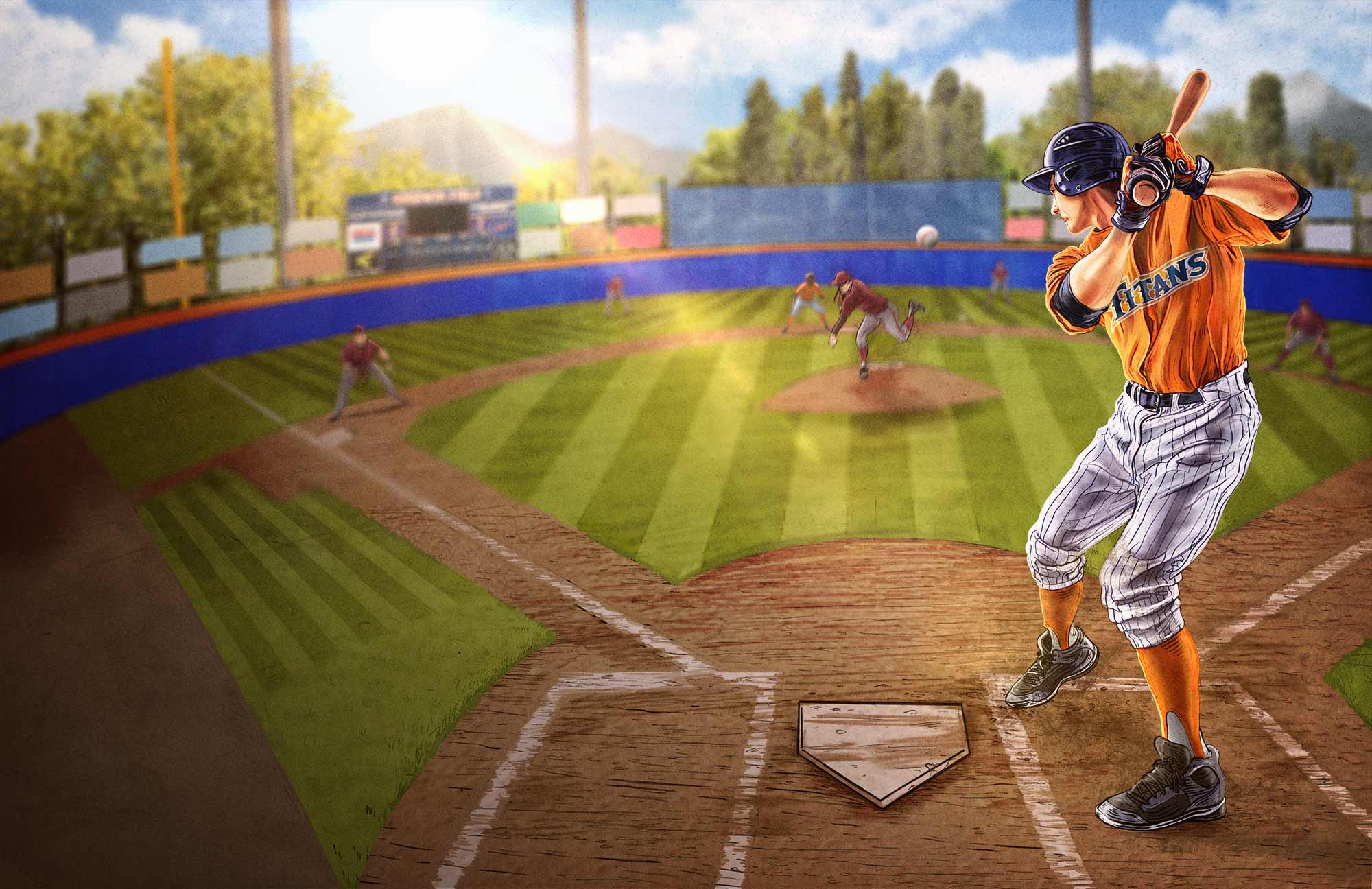 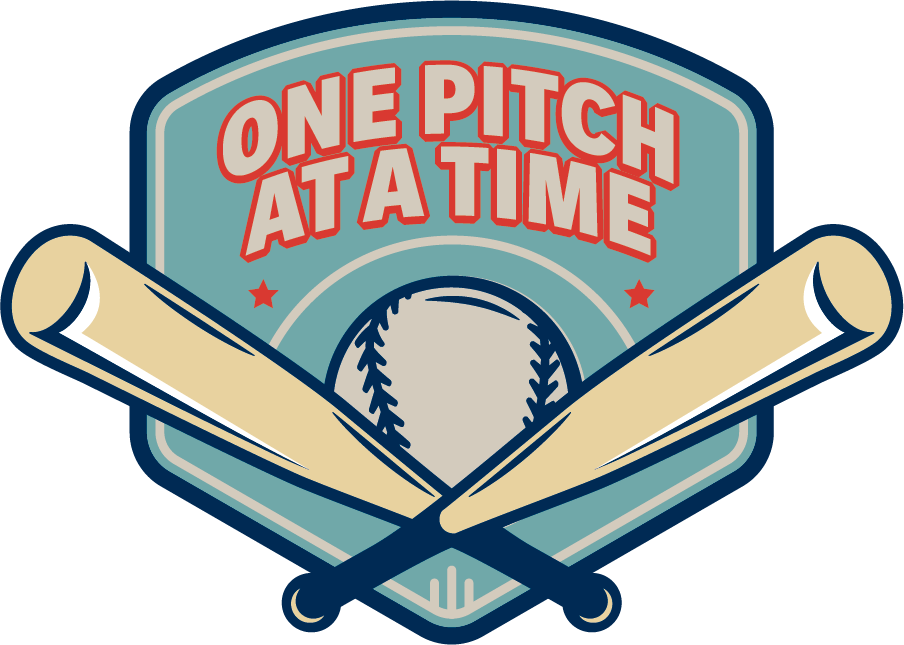 From Goodwin Field to the Big Leagues, Titan Baseball Hits It Out of the Park

In elementary school, Dustin Garneau wrote a letter to his future self: He had big dreams to play in the big leagues — in the National Football League or Major League Baseball. 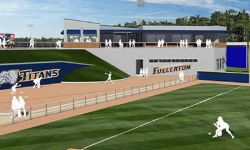 Softball On Deck for a Game-Changing Clubhouse

The high school star athlete was headed to play football in college — that is until Coach Rick Vanderhook offered him the opportunity to play ball at Cal State Fullerton. The young athlete stepped up to the plate, eager to become part of the legacy of Titan baseball.

“When I got the offer, I absolutely jumped on it. It’s the best program in the country. Plain and simple,” Garneau declares.

Garneau started behind the plate at Goodwin Field during the 2006 season and is now a catcher with the Houston Astros. The major leaguer is among the long list of players and coaches who have built Titan baseball into one of the elite programs in the nation.

Its storied history began as an upstart program among the orange groves of Fullerton and today, is one of the premier programs in the country.

Since the university became a National Collegiate Athletic Association Division 1 program in 1975, Titans have racked up 45 winning baseball seasons, resulting in 18 appearances in the College World Series and four national championships.

The program touts 30 Big West Conference Championships, 67 alumni in Major League Baseball and three Golden Spikes winners, an honor given by USA Baseball to the top amateur baseball player in the nation: Tim Wallach in 1979, Phil Nevin in 1992 and Mark Kotsay in 1995.

Titan players have always competed against the best teams in the country. Now it’s time to upgrade the baseball facilities to match competitors' stadiums, and to remain competitive and recruit the best athletes. Construction to build a new state-of-the-art clubhouse is expected to begin this summer.

“Baseball helped to put Cal State Fullerton on the map,” says Steve DiTolla, senior associate director of athletics. “It’s our brand. When we travel across the country and wear ‘Fullerton’ on our hats, it’s synonymous with having a great university and a great baseball team.”

George Horton, Titan head coach from 1997 to 2007 who has earned such national coaching honors as Baseball America Coach of the Year, points out the simple reason for the program’s success.

“It’s the consistency of the baseball program that sets Fullerton apart — from the spectacular first year in Division I in 1975 to today.”

The university launched its intercollegiate baseball program in 1965, when part of an orange grove was turned into a playing field. A decade later, under the late Coach Augie Garrido, the new Division I team made its first coveted appearance at the College World Series in Omaha, Nebraska. The Titans beat top-ranked programs in the region to advance to the baseball tournament, upsetting five-time national champion USC on the Trojans’ home field. 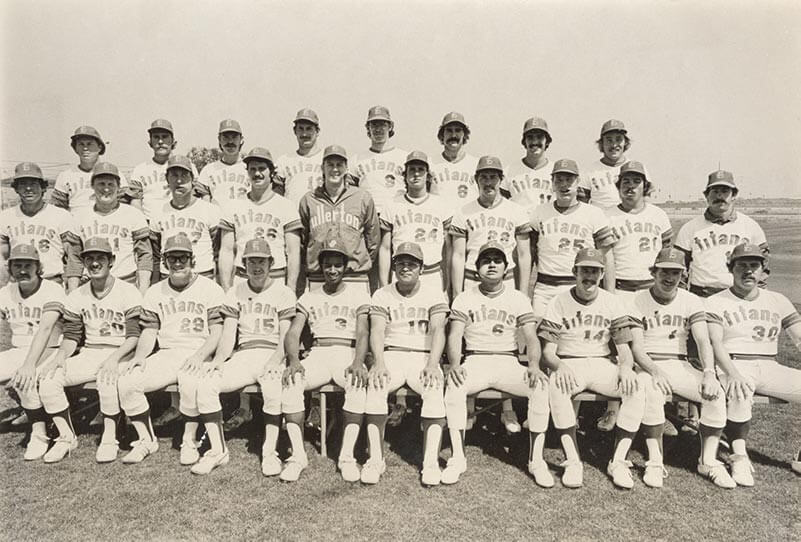 “It was an amazing accomplishment,” beams Horton, first baseman on the 1975 team. He reminisces that Garrido even bought blazers for the players to make their momentous arrival 1,544 miles away at Johnny Rosenblatt Stadium.

Becoming a program known for “baseball excellence” is because of a “David versus Goliath” mentality, adds Horton, part of the coaching staff that led the Titans to win the national championship in 1995, and again in 2004 as head coach.

“From 1975 to present, the program and players have achieved greatness without having the same resources as our competitors,” notes Horton, who has had a legendary career as a college baseball coach for more than 40 years. He most recently spent 11 seasons as head coach at the University of Oregon.

Grit, determination and overcoming all odds have elevated the program to one of the best in the country, Horton believes. “It’s been a blue-collar program from the start. The program continues to win at the highest level and develops the best college baseball players in the country.”

Titans in the Big Show: The MLB

For some players, their baseball careers don’t end at Goodwin Field. The program builds up players to take their game to the next level: the Major Leagues.

This season’s roster and scores of alumni like Garneau have learned from the best Titan coaches in NCAA baseball history: Garrido, Horton, Larry Cochell, Dave Serrano and Vanderhook, head coach since 2011.

Joining them in last year’s MLB playoffs were four former Titan players, now coaches for major league teams. Nevin, Mike Harkey and P.J. Pilittere are coaches with the New York Yankees, and Kotsay is with the A’s.

Turner made his MLB debut with the Baltimore Orioles in 2009 and joined the Dodgers in 2014. He was recruited by Wallach, now the Dodgers’ bench coach who saw him hitting at a Cal State Fullerton alumni game.

In a recent interview, Turner shared what it takes to be a Titan ballplayer: “It’s a guy who cares about what happens for nine innings between the white lines — and winning ball games. That’s what makes the program so successful.”

Garneau was a 19th-round draft pick in 2009 by the Colorado Rockies and made his first appearance in the MLB with the team in 2015. He’s played for the Oakland Athletics, Chicago White Sox, and spent last season close to home with the Los Angeles Angels. This season, he’s wearing No. 13 for the Astros.

“It’s been a wild ride,” says Garneau. “Crazy how my dream came true.”

Garneau makes his home in Orange County, and swings by the field during the off season to visit with players and the coaches who’ve become lifelong friends: “I try to give advice to the players to benefit them. But the coaching staff has a pretty good handle on how to make their players better.”

As a Titan, Garneau played in the College World Series not just once, but three times — an “unbelievable experience” and the pinnacle of his collegiate baseball career. His time on the field, and in the classroom, prepared him for the big show.

“Being at Fullerton was life-changing and definitely got me ready and prepared to play in the minors all the way up to the big leagues,” Garneau says. “When you play at Fullerton, you learn the fundamentals of baseball. The coaches instill a culture of hard work, of no-nonsense baseball. There are no tricks up our sleeves; that’s just how it’s always been done.”

A Clubhouse of the Future

Back in the 1970s and ’80s, there was no baseball locker room, no lights for the field, only two batting cages and a chain link fence that separated the outfield and the orange groves. “Players dressed in the parking lot and we still won national championships,” Horton laughs.

It wasn’t until April 18, 1992, when “Titan Field” was built and hosted its first baseball game. The Titans won both games in a doubleheader against Loyola Marymount — setting the stage for winning seasons for the next two decades. A few weeks later, during a “Field of Dreams” ceremony, Oscar winner and Class of ‘78 Titan Kevin Costner threw out the first ball before 2,000 fans, who watched the Titans beat the UCI Anteaters 8-2.

In 2000, an expansion added 3,500 seats and coaches’ offices, and the stadium was renamed in honor of benefactors Jerry and Merilyn Goodwin. A modest locker room for players also was built beneath the stands, which has two restrooms, a shower and wooden lockers for the 35 players on the roster each season.

The $13.1 million upgrade project includes building the new two-story baseball clubhouse plus modernizing the existing baseball and softball facilities for the history-making softball program, which boasts four consecutive Big West Conference titles. Completion of the project is expected during the 2021 season.

The existing baseball and softball clubhouse, located between Goodwin Field and Anderson Family Field, which includes the Doubek V.I.P. Room, will get a makeover with modernized softball locker rooms, coaches' offices and training room.

A new 4,500-square-foot clubhouse, situated in the left field area of Goodwin Field, will sport a grand entrance into the baseball and softball stadiums and a ticket office. A statue of Garrido — the all-time Division I winner at the height of his career — will greet fans and an upstairs reception area will celebrate the history of Titan baseball.

“The players deserve to be treated in a first-class manner,” Horton points out about the need for the upgrades. “They sacrifice so much for the benefit of the university and community.”

The new clubhouse will feature second-floor window offices for coaches and administrators, plus a terrace to overlook the field — and coaches will get their own locker room. An updated locker room for players, with 10 showerheads, is planned on the first floor. The space also has a kitchen and snack area, as well as space for the athletes to study, hang out and charge their laptops and phones. Meeting rooms, including rooms where players can watch game videos, also are planned.

Vanderhook, a five-time Big West Conference Coach of the Year who served as an assistant coach for 21 seasons before taking the helm as head coach, couldn’t be happier to have a roomier, modern clubhouse.

“This new facility is taking us into the 21st century and beyond,” Vanderhook says, sharing that his current undersized office doubles as his locker room and team meeting place.

Under his watch, Titans have made two College World Series appearances and earned four Big West Conference titles. Earlier this year, Vanderhook recorded his 300th win as head coach with a victory over Stanford.

While the new clubhouse may be a hit in attracting new players, Vanderhook’s vision for the team remains the same.

“Our goal is to play for a national championship — one pitch, one game at a time.”